Digital Device awareness and mobilisation programme was conducted by us and this time at Panchayat Bhawan, Kharauna, Kudhani block of Muzaffarpur district, Bihar.

The awareness programme was conducted by NDLM Training Partner RGCSM and Future Institute of Management Technology and Science, Patna. Local Representatives, Educationalists, Anganwadi Sevika and villagers were invited to attend the programme. Mr. Satyanand Chaudhary, Ex. Principal of R.S.H.S Kharauna, welcomed everyone and motivated villagers to attend the training and become digital literate. The guests were told about the NDLM scheme started by the central government and its benefits to the society at large. Their assistance was sought for creating awareness regarding the scheme so as to speed up the enrolment of general beneficiaries in their areas. About 30 villagers registrations of beneficiaries from Kharauna were done following the programme.

Thank You Mr. Prime Minister For Such a Creative Initiative. We are happy to be a part of Digital Literacy Mission and we thank you on behalf of all training faculties, resource providers and Beneficiaries. Thank You!

Friends, These days we are providing training in Musahari, Muzaffarpur and the pictures shared here are the part of NDLM Training. I will Keep updating news about our ongoing trainings and other initiatives.
Thanks
Sunny Kumar
9212155696 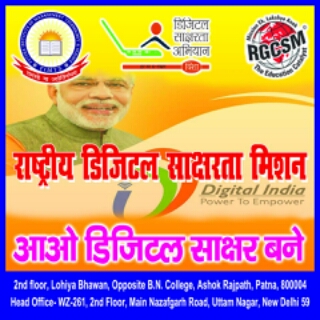